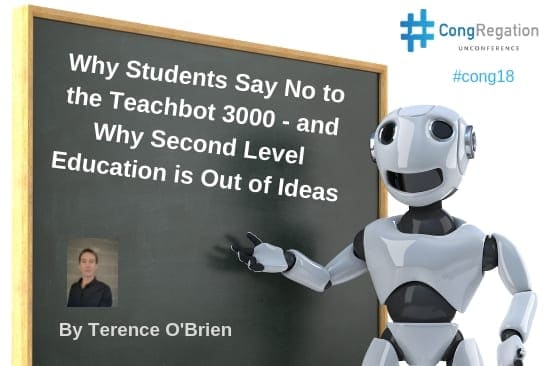 Where role does institutional education have when it comes to ideas? What are some of the obvious take aways for educators at the coal face of the secondary system; and what effect is our punitive assessment system having on creativity in the classroom?

Educator. Chancer. Always on the look out for an idea or two – for the classroom or for life..

‘But why?’ I said, struck primarily by the uncharacteristically energetic response, particularly at the unearthly hour of 9.45am, when these poor teenagers hadn’t even had a chance yet to get on board a fortifying sausage roll or two at the early break.
‘Because……,’ began one emphatically.
‘Because…..well….,’ added another.
‘Because……because…….sure it’s obvious,’ yet another helpfully rowed in.
‘Is it?’ I said, bemused and baffled in equal measure.
‘Yeah it is,’ said the first. ‘It is obvious. Sure if all we had was a robot standing up there, then who’d make us do stuff.’
‘Make ye do stuff?’
‘Exactly, who’d MAKE us do stuff?’
‘Christ’, I thought, any remaining semblance of vocational passion that the hardworking teacher-trainers of UCC had infused in me finally dissipating.
‘So that’s what I’m here for – to make ye do stuff?’
‘Exactly’
‘Stuff like learning?’
‘Exactly’

So that was it. For one brief moment I had believed that the pinnacle of this class discussion, based around a newspaper article on an army of robot teachers calling the shots in future classrooms, was the revelation that I was actually appreciated, maybe even needed. Unfortunately, that revelation came with a slight caveat: yes I was needed, but primarily to make them learn – force them to acquire the body of knowledge that the Irish education system demands that they know, even if it’s only for a few hours. Get in to the exam, spit it out onto the paper, then forget about it and get on with your life. Get yourself to a decent college, in a decent town, with a decent night life. And forget all that stuff you were force fed back in school.

None of this is truly any way revelatory to anybody with even a passing knowledge of life in the secondary school system. The class group mentioned here (ordinary level leaving certs, mainly boys, mainly lower down the socio-economic scale) are just one group, but they are, in my experience, deeply representative of a considerable cohort of students for whom school and learning is seen as an inflicted chore, and for whom it is only ever seen as a means to an end. And for many, especially boys, that end (a third level qualification) is more often than not only serving to appease parents for whom nothing less is considered socially acceptable.

I was fortunate to have the opportunity a couple of years ago to travel with some colleagues to Finland, to spend a week observing the famous Finish education system in action.

What ideas took root as we shadowed our Scandinavian colleagues? Many, as it happens.

The standouts: that we need to move significantly away from the model that guides, pushes, forces many of our young people into a third level academic institution that in no way meets their needs, nor nurtures their talents; that more vocational avenues can be – and are – successful.

The idea too, that a high stakes terminal exam is a horrendous and entirely unsuitable way to measure educational ability and performance; not to mention the dramatic impact on self-esteem and mental health. And not to forget, of course, ideas themselves, and the blatantly obvious disparity between a highly successful educational system, economy and society like the Finns have developed, where the classroom is a creative space in which idea formation and development are given the highest of priorities; and our own, where the joy is sucked out of learning by the information stuffing model demanded by our state exams, where so much is decided regarding the futures of our young people.

Where in our system is the self-directed student being nurtured? Where is the autonomous learner, making steady progress on their learning for life mission? Where are students given space to take ownership of their own education? Why are they not emerging armed with an expanding skillset that will serve them in all aspects of their increasingly complex lives?

The students that are graduating from our schools are in theory the most educated we have ever produced. But the rub is: What defines ‘educated’ and within that, how do we measure in a meaningful way that education? I firmly believe that the current model, where we churn out so many that appear versed in so much, but yet skilled in so little, is failing our economy; more importantly it’s failing our society; and worst of all, it’s failing these young people. It’s time for some dramatically different ideas.