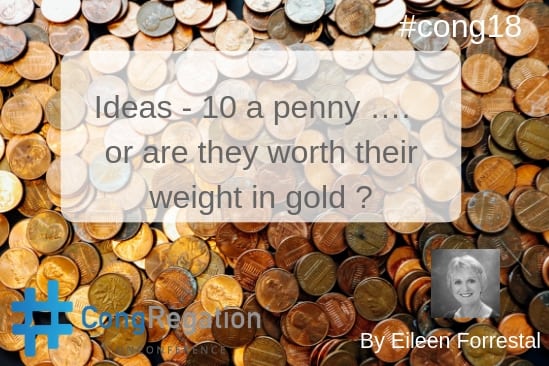 What makes a good idea – something good happening in the world.

What makes a bad idea – something bad happening in the world.

Is World peace is good idea? Nor for those who’s livelihood depends on the business of war.

The idea of home schooling your children may be great until some new realities set in in its delivery.

The idea of an intervention free labour may disappear in the reality of the first contraction and a scream for an epidural!

The idea of writing a great book may disappear when faced with the reality of actually doing the writing ..

Speaking of location, who says an idea is limited by the walls of your skull?

Just because we cannot see light waves or sound waves does not mean these do not exist. We know they do, we believe they do, we have evidence they do. There was light and sound long before we had the ‘scientific proof’

Having recently retired from the position of Consultant Anaesthetist, after a 32 year career as a Medical Doctor, Eileen is now engaged full time in the business at Get Up and Go Publications Ltd, producing a range of inspirational and motivational diaries, journals and events, for adults and teens. The diaries embody a philosophy and wisdom – Forgive the past – Live the present – Create the future, with an intention to empower educate, inspire and encourage people to be aware of their choices, and to be responsible for their own health, self expression, wellbeing, and happiness.

Eileen believes the accelerating rate of change in the world today is overwhelming the capacity of many people to ‘keep up’. “Mental heath and wellbeing issues of stress and burnout are becoming increasingly prevalent. Our Get Up and Go diaries use words and ideas to positively impact the lives of many people, providing a source of timeless wisdom from a ‘pre-information age’ to guide us through the challenges of modern life and help shine a light in the darkness of despair”.

Eileen suffered with a ‘stammer’ for most of her young life and ‘gave up’ on her voice at 13, frustrated by her inability to ‘be understood’ and decided to retire from ‘public communication’ preferring the safety of silence and having ‘nothing important to say’. She chose the specialty of Anaesthesia for 20 years, remaining hidden and silent. That changed in 2001 when she discovered the negative impact this decision had on her life and wellbeing. Since then she has been a strong advocate of courageous self expression, travel, education, self-discovery through personal development and stepping beyond your comfort zone. “The cave you fear to enter holds the treasure you seek”. In 2014, Eileen retired from her medical career believing she could serve her purpose better by using her voice and words than her hands and drugs. After a career spent ‘putting people to sleep’ she is now in the business of ‘waking people up’ to all the possibilities of being alive, right here, right now! Having overcome he fear of public speaking she has since spoken on Radio, TV, schools and stages around the world and has not looked back.

The Get Up and Go Events bring together ordinary people living extraordinary lives, courageous individuals from many walks of life, who have stepped outside their own ‘comfort zone’ to share their experience of living life ‘with passion and purpose’ and are now inspiring their audience to do the same.

An idea is it is just an idea, existing in human thought, inside a human head,  until it becomes a real in the world. Then it becomes something that exits. It must first come out of your mouth …

Ideas come from a space of enquiry – of not knowing – and only when we dwell in the question and listen for ‘the answer’. Ideas need to form, germinate, gestate, then be formulated or transformed into thoughts and words. Thinking about them is relatively safe. It is in the uttering of them that we are most tested. This is where our thoughts and our fears get in the way of our ideas coming to life in the world.  Speaking them is their access to the outside world. That is where they risk being ‘out there’, open to criticism or ridicule or debate. Some ideas we just find impossible to express or explain adequately, others once spoken are instantly connected with and understood.

Today we need ideas more than ever …. there is an urgent need to find solutions to the escalating problems generated by an exponentially expanding economy … the problem solution cycle – every solution becoming the next problem …

We are living in an epistem called ‘progress’ – that tomorrow will be better than today – but the problems caused by ‘progress’ may overwhelm us before our human consciousness elevates sufficiently to permit collaboration over competition. While we  are still in personal survival / competitive mode  – we are not contributing and collaborating in generating big ideas that will contribute  to the betterment of all.

The quest for ideas in the world today is like the American gold rush – “there is more gold to be mined from the minds of men than ever existed in the earth”.  What the world is looking for now are bright ideas for rapid solutions to the problems challenging us globally. The need for new ideas will never be exhausted.

Everything that exists in the world today began as an idea – that became a solution to a problem –  a unique idea that fell on fertile ground, that inspired a team effort, to explore, develop and work on to bring to fruition.

But new ideas are not always welcome. Great ideas can be quashed by the smallest of doubts and terrible ideas brought to fruition  fuelled by the greatest of confidence. Timing, confidence and persistence is everything. Who decides what’s a good or bad idea – from who’s perspective do we judge it?

As long as an idea resides in our own head, its safe there, but nothing much will come of it.  Intention is critical. Ideas must be acted on in order to materialise. The first action is to be spoken and shared. We must speak it out – now we are in dangerous territory! This is where our idea will live or die.  If we don’t speak it … what are we going to do with it…? Nothing? If we do speak it, what are ‘they’ going to do with it, steal it, laugh at it, judge it, criticise it?  “that’s a stupid idea” ”that’s crazy thinking” “that will never work”  “we tried that before”, and it retreats back to the safety of the herd,  the old thoughts – the world of agreement – the silence.  Pity!

What if it’s a really good idea ? Where else can you share it? Who else is interested in looking for ideas for finding a solution to the problem you are experiencing – it can’t only be you with the problem but it may only be you with the idea ….  Or the courage to express it! “Little ideas that tickle and nag and refuse to go away should never be ignored, for in themlie the seeds of destiny.Now there is an opportunity for exploration, for collaboration, for discovery, for creativity, for the possibility of that idea being realised.

To survive the idea must land in an open field, on the ‘fertile soil’, of another’s generous listening, where it can germinate and grow and become an ‘idea worth spreading’! The internet has provided a vast platform to share and distribute ideas – and we need this collaboration to deal with the magnitude of the worlds problems which escalate commensurate with ‘progress’. When we fear others ‘stealing our ideas’ or criticising them or belittling them   – we lose huge opportunities to create the necessary ‘mastermind’ that can bring that idea to life.

Human evolution to date has been slow and painstaking as it took time to bring intelligent ideas to reality. Human beings are subject to ‘doubt’ .That is no longer the case. Artificial Intelligence does not doubt itself, nor question itself, nor show reluctance or fear that its ideas is ‘stupid’ or ‘not good  enough’ or ‘silly’ or ‘bad’ or ‘mad’. A machine will not have to retreat from failure, curl up with a sense of hurt and rejection. It would not have taken AI as long as Edison to develop the working lightbub – 10,000 attempts could now happen at the speed of light!

So, It’s really not about the ‘merit’ of the idea. It’s whether the idea is perceived to have value or not. And the originator of the idea is the most critical ‘evaluator’ in terms of the idea being realized.

While the earth’s resources may be limited, there is no limit to human ingenuity – the creativity and imagination of the human mind. More gold has been mined from the minds of men than has ever been mined from the earth. How deep is the mind’s mine and is our natural intelligence reliable to mine it – or will artificial intelligence get the better of us? The future of mankind is as dependent as ever on  ideas to find solutions to the problems of our own making.

So, whatever about developing the idea – AI is unlikely to come up with new ideas

So ideas still need to be expressed, nurtured, shared. The source of ideas will still be the human mind. And these ‘secrets’ can only be given up willingly, voluntarily. We cannot extract ideas from the human mind – we can only offer them, share them and listen for them, hear them, if they are uttered. Ideas only thrive in speaking and listening.

Human being will still need to courage to express and share and discuss their ideas and risk the usual cynicism when something new is being created.

So put your thinking caps on.

What ideas are you ‘holding on to’ … for fear someone will run away with them?

What idea do you have that you think is good but are afraid to express for fear of criticism?

What idea do you have that you feel is no good, simply because someone ridiculed an idea you had in the past?

What ideas do you have that you are burning to share and you think no one is listening?

What ideas did you have that’ died’ in you because you gave up because you felt no one was listening?

What idea is still burning in your brain that refuses to leave you alone?

Risk it – share it – discover what happens when you let it have a life outside your own head.