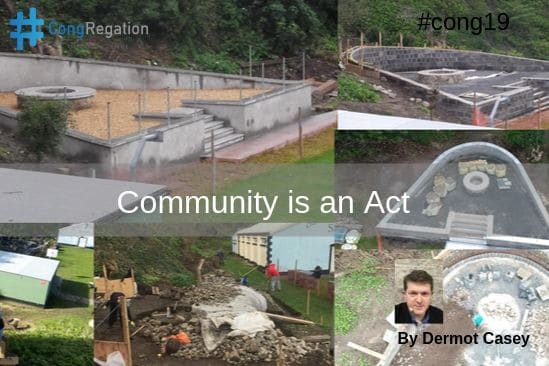 Community isn’t a thing. Its an act.

Dermot is a husband of one and father of three. He’s trying to live in his body as much as his head these days to find some more space. When not avoiding writing blogposts for Congregation he takes a critical look at startup ideas on a daily basis while looking to invest in early stage companies at NDRC.

One email begins “We’d like to thank you and other members of our community” while another notes “as valued member of the community.” Member of the community? What are they talking about. As Inigo Montoya said “You keep using that word. I do not think it means what you think it means”. It’s inconceivable that being on the end of a mailing list means I’m part of a community. If email lists that I once subscribed to, that I’ve forgotten about because Gmail hides them from me aren’t a community, what is community?

The dictionary tells me it’s a noun, a “group of people living in the same place or having a particular characteristic in common” “Montreal’s Italian community” (or Dublin’s Tipperary Community). That definition leaves me unsatisfied.

Over the past few months I’ve been helping to build a fire pit for our local scout troop. The scout troop is a big part of our kids life. They’ve have learned so much, and benefitted from the generous time given by so many people over years. The project to build the firepit started late last year. A permanent spot where we can have 30 or 40 people sit together, cook and chat and share with each other. As the project kicked off and as the first few reminders came in on WhatsApp I was too busy to help out. Gym, daddy taxi service and work were useful excuses at the start.

Eventually I made time. A few hours on Saturdays shifting cubic meters of sand or cement. One day over Christmas moving a 1000 cement blocks. Slowly from a plan, to a hole in the ground, shovel after shovel, and block after block, it has taken shape. A group of parents giving time when they can. Sharing a cup of tea and sandwiches at the break. Tired and sore the next day. The good kind of sore, the kind that is earned. And that’s the heart of what community is. It is a verb not a noun. It’s not a thing. It’s not something we belong to. That’s always felt a little odd to me. Community is an act, made not given. And it is an act performed by the people in the community.

One of the most powerful metaphors I’ve come across for the human mind is that of a whirlpool. When we are alive the whirlpool of consciousness moves with force and intention. When we die the whirlpool is still. The elements of water remain but the mind is silent, gone. So it is with a community. It is a living thing. It is created in the actions of the members of the community. The school community exists in the actions of the parents and the children and the teachers. When people talk about a community dying, they are talking about the ebbing of participation. The wasting of muscles which must be exercised to be of use. Community exists in the repeated actions of the members of the community. And we ourselves are enriched and recreated through participation in the acts of community.

This participation shapes us as much as we shape the community. UCD Researcher Abeba Birbhane talks about Ubuntu idea that people are born without selfhood and acquire it through interactions with others, the Zulu proverb that ‘A person is a person through other people’ [1]. Aristotle said you are what you do repeatedly. The Ubuntu might say you are who you interact with repeatedly. It echoes what businessman Jim Rohn once said “You’re the average of the five people you spend most of your time with.” Or as my mother says. ‘Show me your friends and I’ll show you who you are’.

I’ve often wondered if online communities are communities. Is the act of online conversation able to build a community? In my first job I persuaded the Head of Innovation to connect the ESB to the Internet on the basis of getting access to Usenet newsgroups. ‘People really take time to answer questions from strangers on computers?’ was his initially puzzled response. They do. Is it an act of participation? It can be.

I’ve actively participated in online groups over the years which feel similar to other communities in that they’re defined by active participation. Years ago the ‘Campaign for Trustworthy evoting’ took action into the real world in an important way. And in part I’ve been shaped by people I’ve interacted with online. As have many of us. Abeba Birbhane quotes Mikhail Bakhtin that “truth is not born nor is it to be found inside the head of an individual person, it is born between people collectively searching for truth” in conversation then we are all capable of shaping, and being shaped by in online communities.

That gives me pause. Kranzbergs first law of technology is that ‘Technology is neither good nor bad, nor is it neutral’[2]. It shapes and creates the world in new and sometimes different ways. The virtual nature of online communities causes problems. We see this in how some people are radicalised online. Particularly young men. I suspect that these are people who are searching for something, searching for a community to belong to and are not anchored in communities in their day to day life. We are social creatures As human beings community helps us in an act of becoming.

And at the same time we are worried about the death of communities. We have a fraying of community these days because we have an absence of time. People are commuting longer distances to work, and they are frequently working longer hours and there is a growing precariousness to work (the gig economy). All of this leaves us without time and without the energy to create and nurture communities. And communities take time and they take energy. The act of participation takes energy. We often default to online communities because they take less time and a lot less energy.

It is essential that we are embedded in real communities at local, national, and international levels. We are physical beings and physical presence is important. Participation bonds people together and can also anchor people. Irish communities to an extent protected against disinformation during the Repeal referendum. These mechanisms and these communities were built up over years of hard work. It would be good if we could use physical communities as a sort of inoculation against the vague online disinformation disease spread on and by Facebook and other social networks. Building networks of trust and truth. These human mechanisms are what makes the climate strike a potential for real change. Participation by millions locally, nationally and internationally. People changing by interacting and participating with each other, changing each other and changing the world.