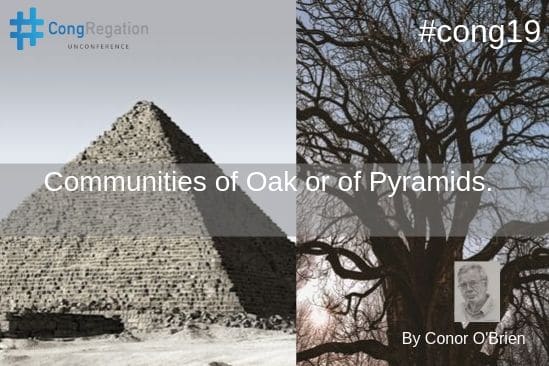 Communities of Oak or of Pyramids #29 #cong19

Environmental degradation is life-threatening for todays young people but it will not be stopped by the world-view that produced it. This is my account of how my world-view and that of my community of farming is changing. And a hope that in taking action we will find a path.

I come from a tradition of cooperative and local involvement and have always been involved in community and farming organisations. I am a director of Mitchelstown Credit Union. Also involved with a local group using walks on the Knockmealdowns and the Galtees to build the community. I help to organise a storytelling workshop on Cape Clear island in October every year.

It is no longer possible to claim ignorance of the reasons for environmental degradation; inaction is a deliberate decision. We need world-views that reflect reality.

This is my account of how my world-view and that of my community of farming is changing. It is also giving me hope that communities in our broader society can change how we view our environment.

I retired from farming 12 years ago, and am still part of the farming community; it is a good identity. I was a medium scale ‘progressive’ dairy farmer committed to using the Teagasc approach, and sometimes was among those who were ahead of it.

The world-view of progressive farming is one of maximising the growth of plants by applying the optimum amount of fertiliser and treatments. The soil was simply a medium to support the plants. Some soils had a greater range of minerals naturally available than others; any deficits could be made good by appropriate inputs. Insects and micro-organisms were treated as an incidental environmental feature.

I was sufficiently environmentally aware to avoid damaging hedgerows, or wild-life habitats at the field edge; leaving habitats like trees and small ponds as they were. Overall, I considered that I had respected my corner of the world; while I had been careless at times, I had done some good as well.

I have two brothers also farming; Ned in dairy, Pat in tillage. About nine months ago, we were each surprised when we realised that we had independently begun questioning our world-view of progressive farming as we knew it.

The trigger for me was a friend who wanted space to grow vegetables without chemical inputs. In Ned’s case it was a curiosity about maximising output on an outlying farm using a low input approach. For Pat it was a question about reducing inputs by avoiding ploughing. Initially none of these initiatives challenged our world-view but as we went deeper into them we began to come across work that did challenge it, and appeared to have solid scientific credentials.

The new information showed that with our focus on ‘the green plant’ we were dealing with only a third of the total earth ecosystem. We were ignoring the other two-thirds of fungi and other organisms which comprise the earth and soil in which the plants exist.

The Oak and the Pyramid

The world-view of intensive farming is a microcosm, a fractal, of the larger world-view. In this view we are external manipulators of the earth as a global test-tube which will not damage us if it fails. The criteria of success is power and control of the surplus produced by maximising the growth of components in the system. Considerations for the needs of the broader ecosystem become irrelevant to the pursuit of success. Any surplus flows up; power is exercised downwards. The structure is shaped like a pyramid in which the components are shaped to support the structure of control.

In an oak forest an individual plant grows as a result of the whole ecosystem growing, and no one tree can dominate the system. Oak trees have a greater diversity of organisms living on them than any other plant in our ecosystem because they need the contribution of each organism. The trees exchange the sugars they produce through photosynthesis for the minerals that the various organisms absorb from the ground.

All models are wrong, but some are useful. An ecosystem is not a full model of society but it could help us to see around the huge world-view of society as a pyramid of power. By seeing ourselves as part of an ecosystem, just as much as an oak tree or the organisms around it, we recognise that we and our communities are not bystanders but intimately involved with it.

Trust is essential in communities. There are no free lunches in nature, nor is there limitless growth and power. It depends on exchange, and just as finance is the currency of exchange in a pyramid, or carbon in an ecosystem, trust is the currency for communities. Trust is a personal commitment that grows through our interactions with others. It grows faster through real interactions than through the virtual ones of social media, but social media can be powerful in supporting real interactions.

It is right to be realistic about the environmental damage; but we should also be alert to the possibilities for change. The oak tree world-view is not strange to us. Just as the organisms of our soil have withstood our farming practices, so also do we have a pattern of strong communities and voluntary organisations; they are a real existing part of our world-view. Congregation itself is an immediate example. We do not have to learn how to build structures where trust can grow; they are waiting to be recognised in our own lives.

Changing our world-view of farming was not easy; it brings uncertainty and doubt about one’s future path as well as regret at what one now views as mistakes. It is a journey that one starts without realising the implications. It can not be done alone, nor with people in whom one lacks trust. We were helped by finding that there were other farmers on the same path. We were surprised by how much support there is outside of the pyramid. The change came from access to information through the internet, and the discussions, walks, and growth of trust that came through the groups.

Being part of a supportive community is like a walk in an old forest; no one ever regrets it.
The oak tree or the pyramid. There is the world-view to choose.

A major part of the change in thinking derived from the work of two Australian scientists, Drs Walther Jehne and Christine Jones.

“ approximately 60% of the ‘greenhouse effect’ is due to water vapour, 20% due to carbon dioxide and 20% due to other gases including methane and nitrous oxide. Emissions from the burning of fossil fuels represent only 3 to 5% of the atmospheric carbon flux. Improvements to photosynthetic capacity, groundcover management and soil microbial status hold the key to both adaptation and mitigation of climate change and global warming.” Dr Christine Jones.