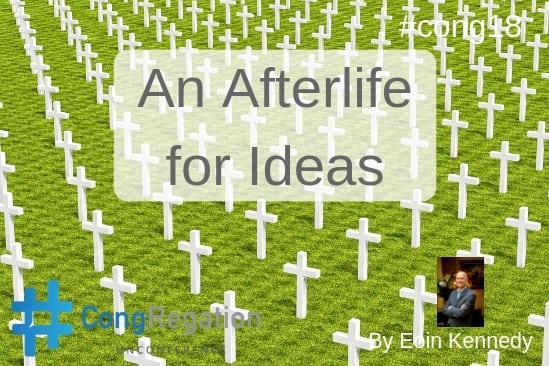 Startups fail at a rate of over 80% and leave behind them an emotion train wreck of broken dreams.  After the dust has settled is there a potential afterlife for all the intellectual capital that could be deployed in new hands and marketplaces?

Eoin Kennedy is the founder of Congregation.ie, startup entrepreneur and a freelance communications consultant living in the west of Ireland.

An Afterlife for Ideas.

A gallop through failed startup ideas and a chance of an afterlife for failed ideas.

I began my start up journey in 2011 when I hooked up with a Longford based developer who had a very similar idea to what I was trying to build (without the technical skills) in a Dublin based PR company.

We joined forces and in a burst of enthusiasm built the technology which effectively paid people per click for promotional content they shared through their social networks – similar to a social version of google adwords.  We got funding, paying customers and entry into the really well organized iGap programme, but realized after a couple of months of lack of traction that we did not have what they called ‘Product Market Fit’ nor the funds to bulldoze the idea through or wait it out (it did not help during ones of these sessions when Sean Ellis of Dropbox commented that double side markets don’t work – thats what we built).  Interestingly this idea is something that could possibly work now with the coming of age of the influencer community and offer greater transparency.  As per lots of start up we pivoted and became a crowd funding platform for schools, community and sports groups (digital sponsorship card and more).  This grew slowly but had a few active (and profitable users) but we could not find enough of these people and community groups by their part time nature take a long time to make decisions and activate campaigns.  Despite great promise, the rewards were too little and living on air does not sustain a family (I had moved from Dublin, left a well paid PR job and moved to a remote location outside Cong in Mayo on the allure of start up millions!).

During the two of these we also build a karma based online system for people who refer each other business or specifically recordable web traffic.

After brief recharge I scratched old itch of an idea that became Congregation, did lots of training and lecturing, some consultancy work, minor web development, event management and an myriad of other roles that has become the norm for living remotely.

However, ideas kept coming and the start up bug never really left my system.  After a about a 6 month break I started a project with other two entrepreneurs to try gamify the crisis management process – ran lots of crisis workshops, attended gaming conferences and interviewed many potential clients (the key learning from the first trip down start lane was you can never do enough market validation before committing to a technology build).  Everyone loved the idea but it was also clear people would pay any money to get out a crisis but very little to avoid it happening in the first place or to even to prepare for one.  I then attend a pre-incubation course to evaluate the potential for a free lance web site for retired people – code named Powered by Grey.  The idea was deemed worthy and in the tricky world of double sided markets has lots of support on the supply side (finance, social, legacy for people who have retired) but struggled to prove the case with paying customers who would contract people with 40 plus years experience among fear of longevity and possible hidden prejudice.  This was parked and I spent a stint working as global media liaison for the Dublin Web Summit and working with Crème Global on establishing the Predict Conference before commuting to Dublin every week to lecture in Marketing for the Dublin Business School.

Again, ideas and specifically problems that I felt technology and automation could solve never left me and after a year lecturing I focused on another idea to automate time recording.  With the support of the New Frontiers programme and the Bank of Ireland Start Lab Galway this morphed from intangible concept to a working prototype that received a really positive customer reaction but I struggled to get the funding and attract the team to build it.  A new house build and looming mortgage made me put a dust cover over that idea to travel to Limerick to work with the ICBE on some fascinating projects and deliver a version of CongRegation for the manufacturing sector called the Energy Symposium.

So why this speed trip through the last 8 years of my life. It’s not to demonstrate the addictive nature of ideas but rather to question what happens with all these ideas after the plug has been pulled on them.

The ideas I worked on failed for various reasons (this submission was originally supposed to be on why ideas fail) from the easy to narrate ones of cash, technical capability, team, product market fit through to harder to accept reasons like bad timing (too early for the market) to the more difficult to acknowledge personal ones like bravery, fear, energy levels and eroding of personal relationship on teams.  The latter can be there all the time but is the final nail in the coffin when things are not going well.

This post and my personal reflection is that each of these ideas could and will probably happen with someone else at another time in another place.  Although it never feels like it when they end in failure, they all generated a lot of intellectual capital to possibly very some very sellable technology.

With start rate averaging a conservative failure rate of 80% this is a staggering amount of business plans, research, intellectual property, technology, coal face knowhow to customers to completely write off and leave to decay on aging hard disk drives.

I know that some of the core technology I worked is valuable (it cost enough to build).  The months of research invaluable and business, marketing plans and collateral could be astonishingly time saving and beneficial to someone in another marketplace that could benefit from all the hard work rather than recreate the wheel. Even urls, social media presence and the online communities that evolve around startups were painstakingly built could be repurposed.

As I look through my folders I see top level ideas (valuable as based on a lifetime of experience) to out of the box ‘just need cash’ or an eager team to deliver ones.  The volume of good quality thinking (of course merged with hyperinflated unrealistic sales projections) still surprises me as I browse through it but reflects the long hours and weeks spent interviewing customers to primary and secondary research to generating code.  I frequently find myself thinking of new uses, improvements or openings for past project but more often I look in dismay, not so much of the ‘Field of Broken Dreams’, but that rather that its just sitting there and it feels wasteful.

This crystalised with a conversation with serial entrepreneur Alan Dowlingat the side of football pitch about building a market place for failed startups and ideas.  An intellectual property scrap yard (we did not get to the point of finding nice euphemisms) where founders could post what they believe is of value from their start ups onto an open online searchable market.  Building on the scrap yard analogy, my last car was worth €150 despite paying many thousands for it a few years previous, but the parts were valuable and broken into bits it was worth multiples of what I got paid.  Many founders just want to see their vision implemented, some need cash and some just hate waste.  I fall into all three.

Ideas don’t always fail because they were bad ideas and sometimes in the hands of another, in a different market at a difference time with a different lens can become something great.

There is precedence here.  Some focus on the stories behind why startup fail, examples being AutosyandFailory.

Some focus on selling the ideas.  Flippa is a good example of ideas selling where you can bid for ideas.  In addition there is a host of others that crowdsource of ideaswith teams that will build the prototype and offer a percentage of the returns for those who originated the idea.

Could a blend of both of these approaches work in Ireland where there was good sharing of the lessons learn and an honest appraisal of the potential of the failed ideas that people could bid for.

Failure can feel like hell but maybe we can offer ideas an after life.

I would love to debate this at CongRegation this year and see if anyone is up for a challenge.