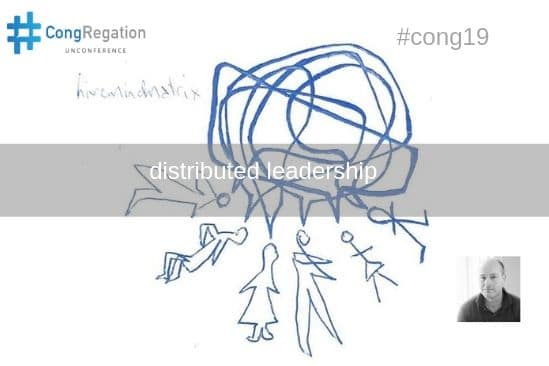 I believe leadership can arise (emerge) spontaneously. It can manifest through a statement, an action, a relationship, or a process.
Supporting people to give authority to their creativity supports leadership. Each person becomes encouraged to offer their intuitive sense of direction to a situation in an instance of knowledge or authority. This is leadership distributed across the collective (group, team, community) or context (project, process).

i use my creativity to make space for yours

You can connect with Jeffrey by email.

“In truth, the right way to begin to think about the pattern which connects is to think of it as primarily a dance of interacting parts”
Gregory Bateson, Mind and Nature

I work with an idea of leadership as an emergent property; that is, I believe leadership can arise (emerge) spontaneously. It can manifest through a statement, an action, a relationship, or a process.
Supporting people to give authority to their creativity supports leadership. Each person becomes encouraged to offer their own intuitive sense of direction to a situation in an instance of knowledge or authority. This is leadership as spontaneous, improvised, fluid, and mediated by context rather than some outside authority. This is leadership distributed across the collective (group, team, community) or context (project, process).
.
In this work I focus on creating (choreographing) conditions that allow and support leadership to emerge. Creative practice encourages attentiveness, physical liveliness, concentration, a refinement of the senses of seeing and listening, and invokes or rehearses a hypothetical ‘sixth sense’ of telepathy or intuition (imagination).
The intention is to have fun, build an ensemble, promote full presence of mind, raise concentration levels, and tune everyone in to what I playfully refer to as hivemind, a kind of collective intelligence which encompasses self, each other, the space or larger context, and the task at hand. It’s about creating an ensemble out of a group, and staging situations that allow people to voice their intuition, their own sense of direction, with authority, and perhaps offer that to the group as a gesture of leadership.
.
An authentic experience of creative process includes developing and trusting intuition; listening to oneself, others and the situation; bravely expressing oneself freely; not taking things personally; trying things out; not knowing for sure; rehearsing and reflecting.
Playing with the idea of hivemind offers the chance to explore and experiment with relations between part and whole, between individual and collective; to ‘tune in’ to the larger creative, thinking, or growth processes taking place; to sense what needs to be said; and place thoughts, dreams, desires, wishes, creative ideas and free associations into an open, communal container.
Individuals can also let go of troubling or difficult issues by placing these thoughts into ‘hivemind’ and allowing them be understood as a ‘symptom of the system’. This encourages free speech and direct address of the situation, without triggering interpersonal conflict or disagreement. It offers the opportunity to freely say what needs to be said, without being tied to ownership of these tidings, in a kind of ‘immunity from prosecution’.
.
Underlying this work is a belief that creative activity, initiative, enterprise, and leadership all exercise a common muscle, and that muscle is best exercised in a social setting. We could call that muscle authority, but I prefer to think of it creatively, as authorship.
Authorship is not about claiming the origin of an idea, but standing up for the progress of that idea into the world. It is a kind of leadership that manifests in an instant, a gesture committing us to what we feel we know to be true or possible, in that moment expressing our belief and passion about that possibility and shaping its trajectory.
We identify this courageous gesture as leadership because it gives voice or action to something-needing-to-be-said: intuition, we could call it: trusting our own knowledge about creativity, community, economy, culture, and allowing these dynamics to take form through their own process.