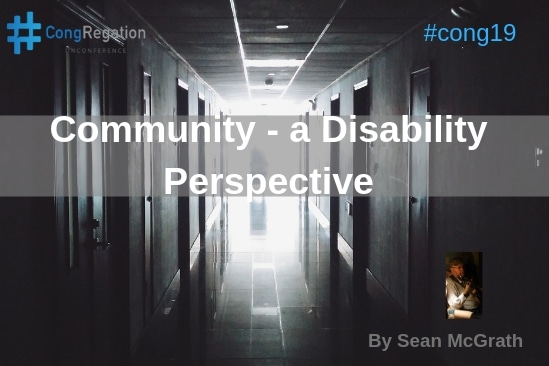 Community can have a profoundly positive impact on people living with disability but current structures and vocabulary needs rethinking.

Sean McGrath is a 35+ year veteran of the IT industry. He holds a first class honours degree in computer science from Trinity College Dublin. He is co-founder and CTO of Propylon, where he now heads up the R+D group focusing on computational solutions in the legal and regulatory domains.

He is the author of three books on markup languages published by Prentice Hall and has lectured in Trinity College Dublin and with the Open University.

He runs one of Ireland’s longest lived blogs at: seanmcgrath.blogspot.com. Sean lives in Galway with his wife and three children. When not working in IT he is an avid amateur musician.

It may come as a surprise to learn that the majority of that 1-in-7 number represents acquired disabilities. i.e. once healthy people who became disabled people at some point in their lives. It can happen to any of us at any time and will happen to a goodly proportion of us at some time in our lives.

For anyone living with a disability “community” often means something very different than what it means to the rest of the population. For people with intellectual/cognitive disabilities – be they congenital or acquired (e.g. brain injuries, dementia etc.) – the difference is often even more striking. Once you have a disability, “community” is a much harder thing to access for a whole host of reasons ranging from physical access to prejudice.

Let us play a game. Let us pretend for a moment that I have control over your future life. Now, think about the five most important things in your life in order of priority. The things you think of as the good things in life. The things that really make life worth living. Possible entries on your prioritised list include money,  vacations, health, family, a job you enjoy, independence, better looks, friends, a place to call your own. etc.

Now, what if I tell you that I am taking away two of them. What two do you want to give up out of the five? Not easy it is? Take a moment…

For people with an intellectual disability, we take the word “community” and we redefine it. We label it “special needs” and until very recently we even used that abhorrent word “retarded”. We segregate these people from the rest of the population. We congregate these people into institutions “for their own good”. Sure, we see the odd “special bus”. We see the odd group of “special needs” going bowling at 11 a.m. on a Monday morning, but mostly we don’t see them at all. They do not live in our communities. They are not living with us.

We take away from them the very things we hold most dearly for ourselves. Do people with intellectual difficulties not value friends? Do they not value being able to make decisions for themselves? Have a place to call “home”? Of course they do but we mostly take these things away from them. We apply a so called “medical model” in supporting them. We keep them safe above all else. Quality of life? Less of a concern.

This is tragic. All the more so because it is an unintended side-effect of mostly well meaning people and systems that have evolved over centuries. Thankfully, change is afoot in Ireland – albeit very slowly.

The HSE’s New Directions policy[1] sets out a vision for how the lives of people living with intellectual disabilities can be transformed through community integration and through decongregation[2].

Ireland has finally enacted the UN Convention on the Rights of People with Disabilities[3] and has begun rolling out the Assisted Decision Making Act[4].

Grass roots initiatives are afoot such as the Inclusive Living Network [4] which aims at informing and supporting people living with disabilities to live their lives the way the “rest of us” want to live ours : in communities, accessing the simple things in life that are worth more than any amount of money to all of us.

Ideation via Decomposition and Combinatorics #59 #cong18

In my opinion ideation – the generation of ideas – is a skill that can be learned, not a gift you have to be born with.

Everyone can come up with good ideas and the more you practice generating ideas, the better you get at it.

Sean McGrath is a 35+ year veteran of the IT industry. He holds a first class honours degree in computer science from Trinity College Dublin. He is co-founder and CTO of Propylon, where he now heads up the R+D group focusing on computational solutions in the legal and regulatory domains.

He is the author of three books on markup languages published by Prentice Hall and has lectured in Trinity College Dublin and with the Open University.

He runs one of Ireland’s longest lived blogs at: seanmcgrath.blogspot.com. Sean lives in Galway with his wife and three children. When not working in IT he is an avid amateur musician.

The phrase “Has anybody any ideas?” itself creates the sense that ideas are things that you either have or have not got at some moment in time. If you don’t have any ideas, then, well, you are out of luck. Shrug shoulders. Hope that inspiration strikes…

In my experience it is rarely the case that the only option is to wait and hope for a good idea to come along. It is almost always possible to fall back on a method that generates ideas. Most of them will be rubbish, but that’s ok. The point is to generate ideas and then evaluation them. This is a proactive approach to “force” ideas to come along as opposed to a reactive approach waiting for them to arrive.

Think about how writers write. Be it novels or poetry or songs or comedy sketches. The vast majority of them do it by cranking out material using some method and then they sift through it for the good stuff. Maebh Binchy used to start her character sketches by giving the characters birthdays. Why? Well, think of all the attributes humans have: birthdays, hair colour, height…etc. These are all variables. Get a list of these variables and start assigning values to variables and pretty soon, you have an idea for a character….But the important thing here is that you got it via a reliable, repeatable process. A strategy for generating ideas for characters.

The musician/producer Brian Eno coined the phrase “Oblique Strategies” for his method. In this case, the variables are little suggestions e.g. “work at a different speed”, “Increase something”, “repeat something” written in index cards. Shuffle the deck, draw a few cards, and voila, you have a set of constraints/concepts that can fire off your though processes for solving the problem at hand. i.e. “What if we ran the motor at halfspeed?”, “What if we added an extra solar panel on the shed?”, “what if we took that line from the chorus and repeated it as the first line of the verse?” etc. etc.

The mathematician George Pólya wrote a book about his way of generating ideas to solve problems called “How to Solve It”. It contains a collection of idea generation gems such as: “restate the problem in your own words”, “look for hidden patterns”, “find some way to draw a picture”, “challenge an assumption”.

Again the point here is that you can take these suggestions either one at a time or in a group and apply them mechanically to the generation of ideas.

The mathematically minded reader will perhaps already have mapped these examples to the concepts of permutation and combination in mathematics. Simple put, if you have a set of variables and a set of possible values for these variables, then you can systematically crank out every possible permutation/combination. Furthermore, as the number of variables you are working with increases, the number of permutation/combinations increases exponentially.

It is therefore very easy to mechanically create an idea-generation “machine” for any given problem where you have endless amount of ideas to work through….

…Of course, most of these will not be useful ideas but once you can create a steady stream of them, anxiety about being out of ideas goes away and you can concentrate on finding the good ones.

One of the most powerful idea generators in my experience is to take something that is currently variable and make it fixed. Example: “What if all the contract clauses were exactly the same size?”. “What if all wiring was the same color?”. Another excellent one is its inverse. Take something that is fixed and make it variable. Example: “What if the handle on the window folded upwards?”, “What if the second chorus was different from the first?” etc.

One final one. Take some aspect of the problem that is not seen as a variable at all and make it a variable. Challenge the assumptions that underlie something being fixed as opposed to variable. Example: “What if customers could have two names instead of one?”, “What if the cup could also be the lid of another cup?” etc.

Good ideas are hard to find. That will never change. But there really is no need to ever be “out of ideas”. Just pick an idea generating method, using concepts similar to the ones mentioned here. Crank them out by the dozen or by the thousand. Then pick out the good ones.

If you are anything like me, this availability of and endless stream of raw ideas is a greatly liberating one that reduces anxiety which, in turn, makes it easier to spot the good ideas when they come along.