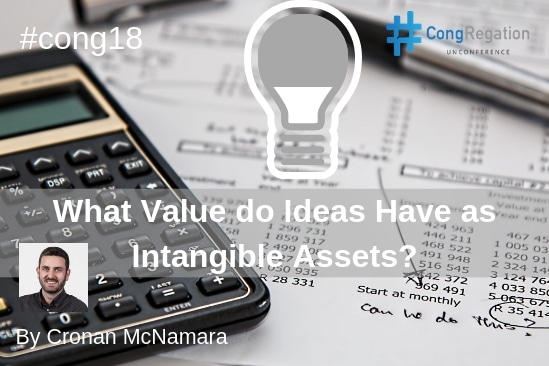 What Value do Ideas Have as Intangible Assets? #44 #cong18

Some ideas you believe in your heart, and you can’t let go of. They just make sense to you. There is a certain unassailable logic to them. No matter how or by whom they are challenged, you know you can overcome the objections. Challenges do not deter your belief in how your idea can succeed. But how valuable are they really, in the context of a business organisation? How can you really tell? And what should you do about it?

Cronan is fascinated by in creativity and innovation and is driven to deliver world class products and services, from Ireland, that make an impact globally.

The mention of intangible assets in the question places this issue firmly in the context of a business or organisation.

I am interested in exploring the value of ideas in organisations, what they’re worth (if anything), how to capture them, nurture them, execute on them and ultimately exploit them.

Well, what about ideas? Are they intellectual property or goodwill? Well both, actually.

Ideas can come from the goodwill of your team, your suppliers, your customers, partners, stakeholders and others. Without goodwill, it is unlikely ideas will be forthcoming let alone acted upon.

According to Wikipedia: Intellectual property (I.P.) is defined as a category of property that includes intangible creations of the human intellect, and primarily encompasses copyrights, patents, and trademarks. It also includes other types of rights, such as trade secrets, publicity rights, moral rights, and rights against unfair competition. Artistic works like music and literature, as well as some discoveries, inventions, words, phrases, symbols, and designs, can all be protected as intellectual property.

I.P. can be protected in law, for example, patents, copyright, trademarks and confidentiality clauses in contracts.

The act of writing it down is important from both legal and value-creation points of view. But the value was essentially there all along, however, before the idea is written down, the risk is that the value can walk out the door.

Writing things down also forces people to think about the idea, elaborate on it and gives others the opportunity to extend them and provide feedback.

“Ideas are cheap, execution is everything.”

Investors often spout the phrase “ideas are cheap, execution is everything”. These are the very people who will refuse to sign an NDA for a startup pitch while at the same time insisting that they love to be in the investment game because of the opportunity, learning and new ideas (those very new ideas the startup was pitching that they could happily pass on to their existing investee companies).

But of course, execution is critical. On the flip side, execution without (good) ideas is also counterproductive! Some ideas essentially have no commercial value for any number of reasons.

According to Peter Theil in his book Zero to One, it is important to realise that we live in a power law world, where 80% of your rewards are likely to come from 20% of your efforts. How do you choose which ideas to pursue and put your efforts into when the decision could be so critical and the opportunity for success of various competing ideas is so unclear?

How to have great ideas

Do the opposite of a Lean Business Startup, i.e.

Get great ideas from your team:

In our modern knowledge-economy, where intangible assets dominate companies’ balance sheets, ideas do have significant value as intangible assets. These ideas, however, need to be captured, curated and exploited in order to realise that value. This is the job of the leadership of organisations.

You will find some that you believe in your heart, and you can’t let go of. They just make sense to you. There is a certain unassailable logic to them. No matter how or by whom they are challenged, it does not deter your belief. If the leadership in your organisation do not share your belief in those ideas, then perhaps it’s time to leave and start your own thing.

Some big ideas you know in your gut will form the basis of your life’s work. They are valuable and they are the ones you pursue.