The Power of the Few to Impact the Many is about celebrating the resilience, ambition and vision of the volunteers in the community that impact the whole community and often generations to come.

Helena Deane is the Horizon 2020 Adviser and Project Support Executive at WestBIC, an EU Busines Innovation Centre with HQ in Galway, as well as the Fusion Programe Consultant for Intertrade Ireland and Principal Consultant at Business Connection Ireland based in Cong. Her educational background is in European Business Administration, having graduated First Class in this field from Universities in Cambridge and Berlin. For the last 10 years, Helena has been working with StartUps, SMEs, Universities, ITs and various Public Organisations as a consultant in the areas of R&D and innovation, technology transfer, feasibility analysis, business strategy, planning,

The motivation to write this blog started with a look back, towards all that was achieved in a very small village of Cong, according to the Census of the County Mayo – with the most modest population in the County for those villages recorded.

However, despite this, its community certainly packs a punch. You may say that I am a little biased living here, but it is hard not to be impressed by the drive and ambition of local people, that are keeping the community live and buzzing. I travel very extensively internationally, and one way or another, when I talk to people, they always say that they have heard of Cong, have been there, or wanted to go there. I couldn’t help but be impressed by that. There is a Spanish guy, who – every single time I talk to him tells me just how much he would want to visit, and above all, have a pint in Pat Cohans. He was so obsessive about it, as a joke between us, I created a 3D virtual tour of Cong for him, with a mock-up of a Guinness pint in the pub.

This is a testament to an incredible community here. When I tell people about things happening in Cong – there is so much to tell – from the tourism initiatives such as the Cong Festival, to the Cong Food Village, the Heritage Society, the activities developed around natural resources and beauty – and of course – the Congregation, the list goes on and on. Driven by the community and for the community a community centre was built on the tails of the recession, with numerous challenges and obstacles, a major achievement. More recently, a playground for Cong was opened and the effort didn’t stop there. What is the magic recipe, that makes all this happen? What is the secret sauce?

The answer is the people – very motivated, very driven, very ambitious in what they want to achieve for the local community and, I dare say, visionary. While the number of people in the community is small, and one could say having a small population is a disadvantage, there is serious clout here and what the ‘few’ have achieved certainly impacts the many – the locals, the tourists, the visitors and yes, the County. It is evidence that real impact can be delivered that is felt locally and beyond, by current generations but also the future and this can be achieved in communities that don’t pack huge numbers, showing a small community can punch above its weight. Cong – population of 145. 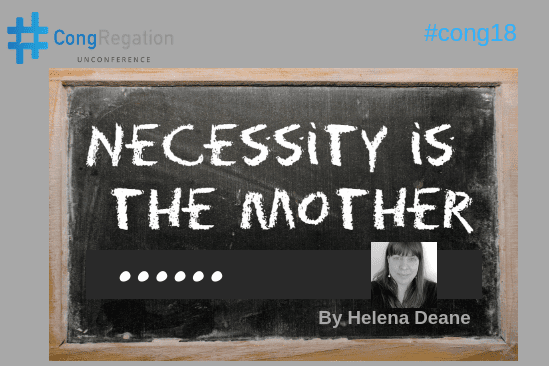 A lot has been said and written about creating the perfect circumstances and frameworks for creativity and ideation. However, some of the best ideas have been conceived as an answer to a difficult situation, with very few resources and no formal support. The necessity is truly the Mother of Invention, and thus, ideas!

Helena Deane is the Horizon 2020 Adviser and Project Support Executive at WestBIC, an EU Busines Innovation Centre with HQ in Galway, as well as the Fusion Programe Consultant for Intertrade Ireland and Principal Consultant at Business Connection Ireland based in Cong. Her educational background is in European Business Administration, having graduated First Class in this field from Universities in Cambridge and Berlin. For the last 10 years, Helena has been working with StartUps, SMEs, Universities, ITs and various Public Organisations as a consultant in the areas of R&D and innovation, technology transfer, feasibility analysis, business strategy, planning, commercialisation and funding. Helena is also engaged by the European Commission and EUREKA as an expert and evaluator to undertake specific assignments concerning research and innovation related to Horizon 2020 and the Eurostars Funding Programme.

When the need for something becomes essential, you are forced to find ways of getting or achieving it. This is where ideation starts and often surpasses its own expectations. A lot has been said and written about creating the optimal mix of conditions to foster ideas, however it has to be recognised that good quality ideas often come from most unexpected places with the help of very few resources – in fact, it is the absence of these resources that makes the ideas come to the fore.

In Russian, the very well-known proverb of ‘Necessity is the Mother of invention’ actually translates as: “Голь на выдумки хитра.”, which literally means “poor people are crafty”. I would therefore argue that sometimes, all the stimulation of creating the right frameworks and extensive supports can be counter-productive to ideation and that the more challenging the environment, the better the ideas will be. In such circumstances, people’s boundaries are pushed and they are forced to revisit again and again what they think they know and how they apply what they know, often leading to improvisation. A case in point is the way that many businesses had to cope during the recession.

When the economy is good, companies recognize problems they have, but are not strongly motivated to fix them. For one thing, when business is booming, there is too much work to be done (and often too much money to be made) to consider making fundamental changes to processes that might slow down production or customer service.

With suddenly very little cash and other resources at disposal, it is those companies that did looked to ideas and innovation and – reinvention that managed to survive and not only that, that managed to grow despite the very difficult economic environment and the challenging climate. Arguably, being creative with many resources and with many supports is easy, however rising to the challenge under difficult and unpredictable circumstances is what we should learn to cultivate and foster….’when the going gets tough, the tough get going’, and teh tough ones have all the ideas.