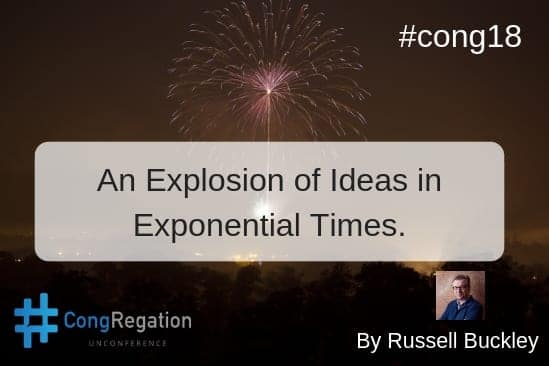 An Explosion of Ideas in Exponential Times. #20 #cong18

While exponential is an adjective that gets bandied around very frequently, especially as it relates to technology, not many people take the time to really understand what it means and the implications.  As an example, take 30 linear steps and you travel around 20 metres. Take 30 exponential steps and you get to the moon.  Thinkers about technology and its effects on society need to understand and apply this important idea.

Russell Buckley is a Partner with Kindred Capital, the early stage venture investor, based in London. He is a previous Global Chairman of the Mobile Marketing Association and was an active Angel Investor in over 40 companies (via Ballpark Ventures).

Russell’s previous role was with mobile advertising startup, AdMob. He learned about AdMob soon after its launch, joining as its first employee in 2006. His remit was to launch AdMob into the EMEA market and four years later, AdMob was sold to Google for $750m.

One of the central concepts of my thinking is trying to apply an understanding of “exponential”. It’s a word that gets bandied around a lot these days, particularly about technology, but I don’t think enough of us stop to consider what it really means and its implications.

Exponential is a mathematical concept that means something doubles in a given period of time. One of the most frequently used examples is Moore’s Law, which suggests that the processing power of computers doubles every two years, which means that computers get faster and cheaper from one year to the next.

However, exponential as a concept is hard us to understand on an intuitive basis. Therefore, I find metaphors and stories are the best way to really drive home the implications.

As an example, we all understand what would happen if we walk thirty steps in a particular direction. However, if we take thirty exponential steps – where each step is double the previous one – we actually get further than the moon.

This explains why we consistently underestimate the impact of technology on business, society and indeed, our lives.

Perhaps my favourite illustration is the Stadium Scenario. Imagine that you’re sitting in the cheap seats of largest stadium you can think of, right at the top and at the back. A man puts one drop of water on the centre spot, which is going to grow exponentially and double every minute.

The first question, is how long before you drown? Our evolved brains instinctively tell us that it’s going to take months or maybe, years. No imminent danger.

In fact, the stadium will be full in a mere 49 minutes. This means, you do need to act reasonably quickly.

But perhaps the most interesting point is that after 45 minutes – 4 minutes before you are under water – the stadium is still 97% empty. In other words, the change seems to be very slow at first and then very quick, despite the growth being mathematically at the same rate.

That’s why, we see apparently radical changes like these: 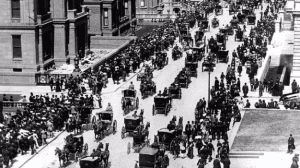 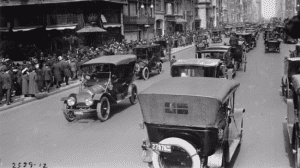 Or these two pictures showing the election of Pope Benedict and Pope Francis. 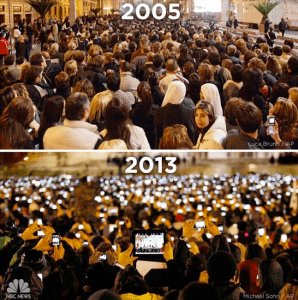 If you spend any time thinking about technology or your job involves understanding where the future is going, it’s essential that you apply the exponential concept to your ideological framework. Plenty of otherwise highly intelligent people make very poor decisions because they apply linear thinking to exponential scenarios, with potentially disastrous consequences.

As we progress in the next 20 years or so, we are going to see a Cambrian explosion of ideas enabled and driven by this exponential growth in technology, as what was recently impossible becomes reality for ordinary people. The super-computers in our pockets already give us access to more information than Bill Clinton had when he was in office. But try and imagine a world where computers are a billion times more powerful and could be the size of a red blood cell.