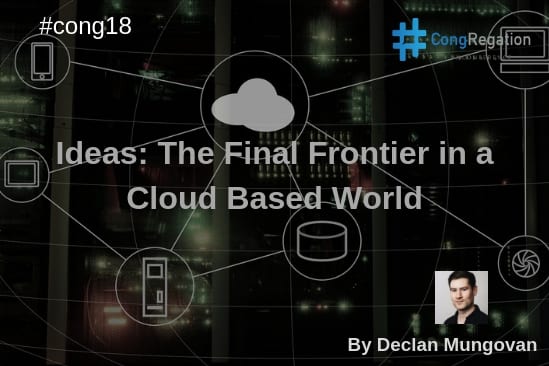 Ideas: The Final Frontier in a Cloud Based World #72 #cong18

Recent advances in cloud based technology has helped remove many of the barriers of entry into the world of online based services. CMS tools like WordPress and Joomla let individuals quickly create new online marketplaces, discussion forums and much more. While cloud platforms like AWS and Azure allow for quick and cheap product scaling where you only pay for what you need and, importantly, don’t need to invest in upfront hardware costs. This enable applications to be tried and tested at a far greater pace that previously possible. Rather than the technology stack being the main barrier to getting a product out to market, the ideas underpinning the product is the final frontier.

I spent the last 6 years working in the US as a computer programmer including 4 years in Silicon Valley.
I have a PhD in computer science and my work mostly focuses on scalable systems utilizing .Net, C#, SQL Server and Elasticsearch. I’ve worked on several projects that convert traditional application design into highly scale-able cloud based services.
I’m interested in startups and utilizing cloud based technologies to get them up and running.

Sitting in your corporate cublical one morning you have a killer idea for an online marketplace that sells used cars. You know the public will love it and you want your idea out there as soon as possible. The only problem? It’s 2005. Tools like WordPress and Joomla are still in their infancy so you’ll have to hire a team of coders to write the HTML, CSS and PHP needed. You’ll need to buy an expensive server to traffic the data and ensure it’s connect to the network at speeds fast enough to serve up customer requests. And you better have a plan for scaling your hardware once it becomes a hit. After considering all this you go back to your desk job and forget about the idea.

Fast forward to 2018. You have another killer idea one morning. This time you download a WordPress theme, host it on AWS Lightsail and register a cool domain name. You submit an order on Fiverr to design a trend logo. Your product is up and running so you go for lunch.

The modern approach to software design leans more and more on the idea of just utilizing exactly what you need. This evolved from renting out remote server from companies like rackspace, to virtual servers on AWS or Azure. The latest trend towards contains and lambda functions streamlines the process even further.

The opportunities that have opened up in a cloud based world where the initial investment costs in expensive technology stacks has all but been removed can’t be underestimated. Even billion dollar companies (like the company I work for Xero) are migrating their entire technology stack to cloud based frameworks like AWS. Such is the industry wide confidence that the corporate world has in cloud based technology that they’re willing to place their entire customer data into the hands of a third party operator. Encryption, amongst other safeguards, has allayed many of the fears that data will be mismanaged by the outside service providers. Even highly publicised data breaches like the ones at Facebook haven’t tempered the cloud migration drive.

So we’re at a place where the main hurdles to new product development is moving from the hardware and software to the ideas that individuals or groups can generate. This is reflected in the way venture capital firms are investing in startups in Silicon Valley and other places. Rather than betting heavily on what is considered the best idea, investors are investing smaller amounts of seed funding on lots of ideas and seeing what works. The reality is that even though many will fail quickly a small fraction of “unicorns” may grow into highly successful businesses. This strategy would have been far more difficult in a world where getting started was far more complicated.

So this opens up questions about how we encourage and incubate ideas in this new digital landscape. The tools we teach in schools and universities and the mind set this engenders all need to be looked at. The “hacker” culture of Silicon Valley where an idea is quickly designed, built and rolled out goes against many of our older intuitions.